To finish this menu of, we will spoil ourselves with chocolate, coffee and hazelnut all in the shape of two version of the traditional French Christmas cake called bûche. The bûche can be like a Swiss roll or much more imaginative yumminess created in a shape of a log. Caution! These cakes are very very satisfying and RICH enough to make you feel very guilty after each spoon full. Just saying.

If these cakes were shop bough, they would cost at least £5.00 each… great as a treat.

Ground hazelnut is not always readily available in supermarkets or if they are, they

cost quiet a lot of money, It is much much cheaper to buy them with skin, roast, grind and sieve at home as I did. If you don’t fancy doing that, use ground almond instead.  I prefer hazelnut because of its strong flavour. Against the coffee it was fantastic!

Once the ground hazelnut is ready, set aside.

Next remove the “crust” from the Madeira and cut out two mini logs of 3cm x 3cm x 12cm to fit into the baking tin. The idea here is to cut the Madeira so it will fit fully in the inside of the cake. So, it should be smaller than the size of the cake tin. Once the Madeira is ready and set aside.

Break 2 and half chocolate tablets (250g) and melt them in a Bain Marie. Set the liquid chocolate aside to cool down a bit.

While all this is going on, the double cream should remain in the fridge until it is needed.

Dissolve 1,5 teaspoon of coffee in 100ml water, set aside.

Now, prepare the cream. Pour the 300ml of cream in a large bowl with the sugar and whisk until it starts forming picks.

Add to the cream, the melted chocolate and gently fold until the mix become one single and regular colour.

Now divide the mix in two. In one half, mix in the ground hazelnut, leave the other half plain. See blow the mix progression.

On to the moulds. Wet the inside of the cake tins with water and line with cling film allowing about 5cm of film to hang on the outside of the mould. Make sure that the film inside the mould is as flat as possible with no folds or pleats.

Once the moulds are lined up with the film, spoon in the first layer of the plain chocolate and cream mix. 2 tablespoons of the mix per mould should do. Now make sure to spread the mix evenly in both moulds. Spread on the bottom as well as on the sides. This will help with to shape of the dessert.

Once the first layer is spread, dip the Madeira cakes in the coffee and place them on the middle of the cake tins now lined with chocolate mix.

Cover the Madeira cake with the chocolate-cream-hazelnut mix, then tap the tins to allow the mix will fill all wholes. If you still have Madeira cake left, dip it in coffee, place in the tin and recover with the left over chocolate mix until the tin is full.

Now bring in the cling film ends hanging on the outside of the tin and fold them over the dessert tightly, then place the both tins in the fridge for 1 hour.

Ready for a nap

Out of the moulds

Meanwhile prepare the presentation plate for both dessert. The bûche can be very fragile and it is not advisable to more it around event two minutes. If you are decorating it, it is best to do so as cleanly as possible while the cake is on a presentation plate.

Prepare the covering for both cakes.

For one, simply melt 50g of chocolate with 20ml vegetable oil or Hazelnut oil if any available. Adding oil to the melted chocolate will prevent it from being too hard to cut with a knife and also give the chocolate a shine.

For the second covering, soften 100g butter at room temperature and when it becomes gel like, whisk it to soften it even further with a pinch of salt then sieve in 100g icing sugar as well as 1 teaspoon of coffee granules. Mix well until obtaining a milky coffee colour. Spoon this mix in a piping bags ready to be piped on the cake.

Once the desserts have been in the fridge for an hour, take them out and carefully unmould them and remove the cling film.

For the other bûche, simply pipe the coffee icing in a pattern of your choice and have fun. As for me, I simply created straight lines to imitate a log. Afterwards, I sprinkled chocolate shaving and topped with whole roasted hazelnuts.

Et voila! It is all done. J

I hope you have enjoyed this menu. To see my whole Christmas menu for 2, type #NoelByHJ in the search box.

I have also create 9 recipes for the Christmas leftovers if you had turkey with the usual trimmings. Just search #XmasScraps or #ChristmasScraps.

Thank you for following.

Happy Christmas to you and yours. See you in 2016… don’t forget to visit Croydon Radio to listen to the show dated 5th December on the podcast with Tom C. 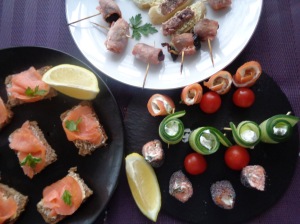 Boucheés are little starters or canapés that can be eaten in one or 2 mouthfuls.

In this set, you will have  salmon, prune, cucumber and paté. The boucheés are detailed below. They are just options that you can offer on your tables. Not all of them will be necessary… the cost for each set varies from £1.00 to £3.00. 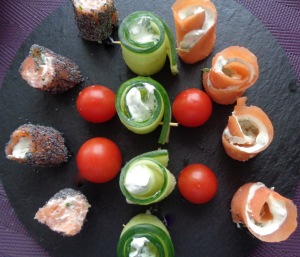 The bacon cost 99p for 10 slices and the prunes cost £1.39 per packs of about 30 units. The left overs can be used for breakfast the next day or for yogurt.

Rinse the bacon and slice them length way.

The onion is just to add flavour and it is optional. Cut it as thinly as possible. Set aside.

Now a halved slice of bacon, place on it an onion string, then the prune and roll.

Hold with a tooth pick and repeat until all 10 are done. The can be prepared in advance and are best eaten hot.

To cook it, place the prepared prune on a baking tray and cook for 20 minutes at 180°C.

Finely chop the small hand off of parley and place it in a bowl. Add two full teaspoons of crème fraiche and sprinkle garlic granules. Mix well.

On flat surface, lie the smoke salmon slice flat, spread on it the crème fraiche mix and roll tightly, then cut in two. Keep on half other roll as it is and cover the other with poppy seeds.

Repeat the process until all 4 slices are done. you should end up with 4 small rolls covered in poppy seeds and 4 plain. 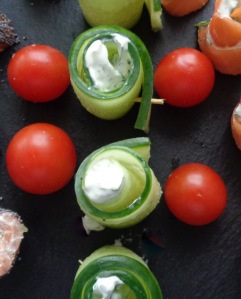 Ingredients for the cucumber roll:

Cut a whole cucumber in half (width way) and cut the extremities. Using a mandolin or a potato peeler, slowly cut 4 large, but thin strings of cucumber. Lie them flat.

In a bowl, mix 2 teaspoons of crème fraiche with salt, black pepper and garlic. Stir to mix. Now spread this mix on the cucumber slices and roll, then keep them rolled with tooth pics.

Note the slices must be about 10cm long to have a good roll. 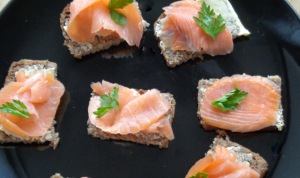 Cut the bread, spread butter and add salmon, then top with herbs. Enjoy.

The last option will just be slices of baguette with Ardennes pate.

And if you don’t like any of the above, you can always buy LIDL’s platter below at £2.99! 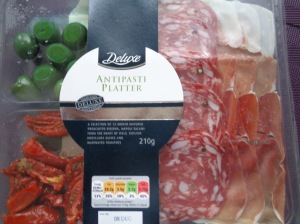 Christmas is around the corner!

I have been asked by a media Co to come up with few ideas on how leftovers could be used after the big Christmas dinner… I thought you might be interested too!

You know? After you have emptied you bank account and slaved in the kitchen to cook for 20 people (15 of which you only see when there is a family party with serious food).

After they’ve gone, you are out of pocket but, what can you create with that left over mash, leg of turkey, roast potatoes for your household?

How about a little “chuck-all-In” turkey and vegetables stir fry served with some pomme dauphine or duchesse? How about a turkey & roast potato stew with coconut milk? The one I could wait to eat was the Brioche & Turkey sandwich… couldn’t resist. Didn’t want salad in it, used coriander… yum!

I won’t tell you what I’ll be doing with the leftover Christmas pudding and cheese board. You’ll just have to check in later using XmasScraps in the search box. On twitter it will be #XmasScraps. 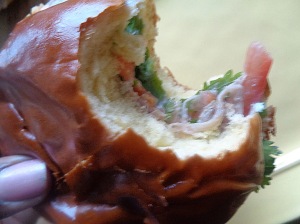 For my next show on Croydon radio next Saturday, I am looking at doing a simples dinner for 2…

If you are on a budget you are not going to decide to invite the world and its children round to yours are you? Don’t do like the Jones, your purse ain’t just not full enough.

So as a couples who has made an effort to save a bit for this special Christmas dinner, it is not about overeating, but making sure that every single mouthful is fully enjoyed. There might not be gifts, but food will square that off! It is called contentment!

The menu might have salmon, pate, lobster (from Iceland or Lidl not sure yet), maybe some wine? Not a fan of fizzy, so champagne is off the menu. I am doing it á la Française… Oh and there will be a yule log… Just because I cannot understand the British Christmas pudding.

During the show, you will get to hear a bit about how the French celebrate the food is all special and dinner is after midnight mass… Christmas day is just the follow up to the night before and people eat lighter. The hashtag for my Christmas show on Croydon radio will be #NoelByHJ. Use it on twitter and in the search box to find all related recipes.

Do check-in in a few days to see how much it will cost.